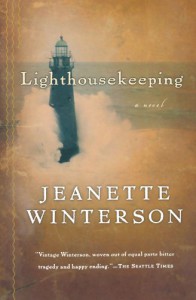 This is the second of Winterson’s novels that I’ve read, the first being Oranges Are Not the Only Fruit. Both are rather good in their way; some parts are written very well with humorous phrasings and other passages that evoke beautiful imagery with poetic undertones. But my main criticism for both novels is the format and storytelling. There's stream of consciousness combined with magical realism; and if you’re not careful in your reading, you can miss quite a bit of pertinent information.

In Lighthousekeeping, there are several storylines that are weaved together to make one coherent whole, the main thread being Silver’s story marking her growth and development through her relationships with her mother, Pew the lighthouse keeper, and her lover. In that sense, I did like the bildungsroman theme… the psychological and social growth of the narrator—the pains of growing up and trying to find her place in the world. As well, I liked how Winterson used storytelling as a means to help the narrator with her developmental journey. But, I couldn’t help but feel somewhat alienated by the narrator, since she withholds pertinent information. Two thirds of the way into the book, someone asks Silver, “Tell me a story” but you don’t find out the identity of that person until the final few pages. And when you finally get to the reveal, that this person is in fact Silver’s lover, you sort of get the feeling that she’s almost embarrassed to profess her love for her, as she only once fleetingly mentions that her lover’s a woman. I actually almost missed the reference. In fact, Silver makes her lover almost genderless, she’s never named, the references are most always “you” and the physical descriptions of the lover are androgynous… the person could be equally male or female.

Silver’s unreliability as a narrator is also readily apparent in her perceptions of reality. A lot of her actions in the story almost mimic the stories she tells herself, or were previously told to her by Pew. Her view of the world became colored by those stories, in effect distorting her perceptions. Towards the end, it was hard to determine if the events she describes actually happened or are really just stories in themselves, for instance her return to the lighthouse.

The threads I loved were Pew’s tales of Babel Dark and his double existence as both lover and husband. It sort of had a Hardy-esque quality, mixed with themes from Gaskell’s North and South and The Picture of Dorian Gray. Even though the story itself had a déjà vu feel to it, Winterson brings in themes of nature and identity through Dark’s interactions with Darwin and R.L. Stevenson. Thought this was well done. Though, Winterson doesn't really finish this storyline—there's no mention of what happens to Dark's wife and son.

Overall, the good parts outweighed most of the bad, making it a likable read.